Latest figures released by ESPC show that activity in the property market in Edinburgh, the Lothians and Fife has continued to rise. During the three months to April the number of homes sold in Edinburgh, the Lothian's and Fife rose by 39% annually. The number of homes coming onto the market also rose, though at the more modest rate of 13% annually.

With buyer demand strengthening, market conditions are now moving in favour of sellers. Between February and April this year 52.7% of homes sold in Scotland’s Capital achieved a selling price equal to or above their Home Report valuation – up from 24.3% during the same period in 2013. This also marked the first time in almost four years that a majority of properties sold in Edinburgh achieved their valuation.

Commenting on the results David Marshall, business development manager for ESPC said: "Over the last year and a half we’ve seen buyer demand rising, with the number of homes selling increasing sharply. Whilst the number of homes being brought to the market is also higher than it has been in recent years, supply is currently not rising as quickly as demand. 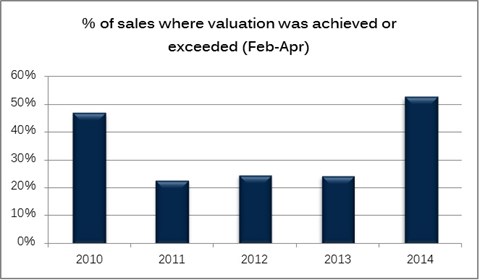 "This naturally puts sellers in a stronger position than they have been for some time and that’s reflected in the figures we’re seeing here with Home Report valuations. A year ago, less than one in four homes sold in Edinburgh achieved their Home Report valuation. Today, more than half of the homes selling in the Capital are exceeding their valuation.

"At this stage house price inflation remains fairly modest. Across Edinburgh as a whole the average house price has risen by 1.0% annually from £198,884 to £200,895. Whilst there are some pockets within the city where sharper growth has been observed, in most cases these come on the back of falls seen a year ago. For example, the average price of a one bedroom flat in Leith and Easter Road rose by 10.4% annually over the last three months. This followed a 9.1% decrease during the same period a year ago however and prices are now back in line with levels seen a year ago.

"If growth in demand were to continue to outstrip supply for a prolonged period this would naturally exert an upward pressure on prices, but as the market strengthens and confidence continues to grow we should see more sellers coming back to the market and this will help to ensure house price inflation remains at sustainable levels."