Topics
9th February 2012
This is the first blog post from ESPC-sponsored paralympian Libby Clegg. Libby will be blogging at least once a month and more frequently as the games approach.

Hi everyone, this is the fir­­st of my blogs for ESPC - many more to follow! 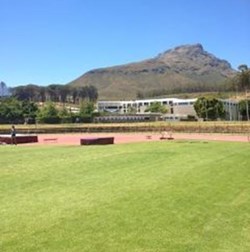 In January, I went to South Africa for three weeks on a warm weather training camp with some of the athletes from the Olympic and Paralympic athletics squads. Whilst I was out there I had some fantastic training sessions, especially in my weight lifting programme which has seen massive improvements in my strength and power - it helped that the weather averaged out at 30 degrees, so I couldn't complain to have a January in the sun!  A typical day consisted of either circuits or weights in the morning and then a track or cardio session in the afternoon. My coach Keith Antoine, very bravely participated in all my cardio and circuits sessions which I do admire as he is getting a bit old now!

Unfortunately during the second week I aggravated my foot slightly and could not do any track sessions for that week. This was rather frustrating as I wanted to train but the physiotherapist and doctor have final ruling.  In total I had three "days off"to do the tourist duties.  Sadly, for the first two days off, I stayed at the hotel as I was really tired and as it was so hot I did not want the heat to have a negative effect on my training. However, I did manage to go to the Spire winery which had a cheetah and birds of prey sanctuary.  I held a black eagle which was really cool as I am normally terrified of birds!

When I got home my training continued as normal in Loughborough; slightly colder than how I remembered it though. Two weeks ago, I travelled up to Edinburgh for my launch with ESPC which was fantastic!  I am really proud to be working with such a positive sponsor of Scottish sport.  We had a photo shoot at Meadowbank sports centre with Edinburgh Rugby player Tom Brown whom I knew previously from training at the Scottish Institute of Sports' gym in the city centre.  I also got to wear some new running kit provided by ESPC which looks wicked! We finished the day off by visiting Trinity Primary School, which involved a Q+A session with the pupils - their questions were better than some journalists!

Recently I was back up in Scotland for another school visit as part of Champions in Schools, a charity I have been working alongside with for a couple of years now.

Once again, I am looking forward to my partnership with ESPC as they will help me to achieve my London 2012 dream.  Watch this space…

To find out more about Libby and what she is up to this year visit Team Libby on Facebook.