The outdoor season is well and truly up and running. Since my last post I have been clocking up the air miles again.

The trip to Brazil was a long one with a transfer in New York. We did have to jump the queue a bit in immigration in New York to ensure we made our connecting flight. Hopefully, that did not annoy too many of the people we moved in front of.

I tend to pass my time on long haul travel listening to audio books. The TV screen in the head rest does not really work for me with my vision. However, on one of the flights I spent 9 hours talking to my coach Keith. We both like to chat.

Racing in Brazil was a great experience and good preparation for 2016. I did not have too many issues with the heat and it was just the humidity that took a bit to get used to.

I was looking forward to renewing my rivalry with Guilhermina Terezinha of Brazil (we raced each other at the BT Paralympic World Cup) but unfortunately she was ill and unable to race. I am sure our paths will cross at some time this season. I won my 100m and 200m, which is a good start to the season.

Let's take a break and just take a second to look at my room in Brazil... mmmmm.... 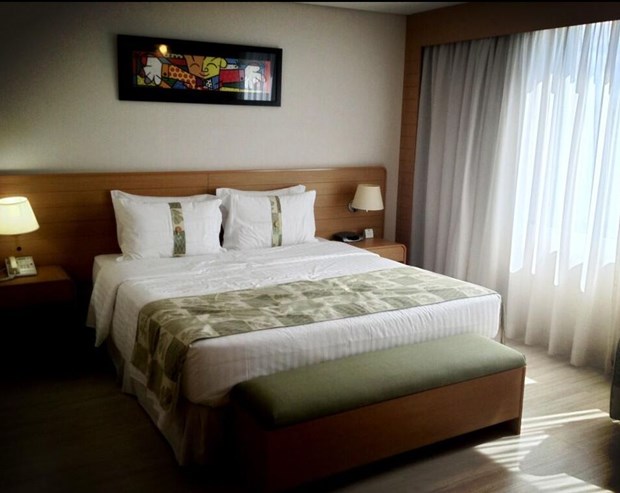 I came back from Brazil on a Monday and got to my home in Loughborough that afternoon. I was then up bright and early on the Tuesday to catch a flight to Spain for some warm weather training.

Training is going well. Both Mikhail and I are both injury free at the moment. Long may that last. We are getting used to the new guide rope.

It is a bit uncomfortable when in the start position (it cuts of the circulation to my hand a bit) but for the race it is proving ideal.

Each season it usually takes me about three to four races to get into the flow of competitive running and starting to see my better times.

Based on this and how training has been working out, all signs are positive for a good season ahead and targeting the World Championships in July. My times at the English Athletics Open were very pleasing.

Away from the track

Away from the track, life has been quite quiet. I am currently finishing the Tawny Man Trilogy by Robin Hobb. If fantasy books are your thing, this trilogy is well worth a read/listen.

I have not been able to spend much time back in my flat in Edinburgh. I was home for a few days and managed to catch-up with a few friends  as well as get a bit more training.

Hopefully, I also added to my big-sister points by waiting in at my brothers flat for his new sofa delivery as he had arranged the delivery for when he was out of the country (not sure if this was by design or accident).

As usual the delivery arrived at the end of the 3-hour time window. Now if I can just get my brother to recognise the concept of big sister points, it will have been worthwhile!

In June I am in the following competitions so keep an eye out for the results...