The average house price in Edinburgh in the three months to October fell by 6.0% annually according to latest statistics produced by ESPC. The average selling price of a property sold in the Capital between August and October was £204,698 - down from £217,867 during the same period in 2011. This marked the third consecutive period during which an annual fall was recorded.

West Lothian saw a sharp annual fall of 14.5% however this offset an increase of 16.5% during the same period meaning that the average house price in the area is now back in line with that seen in 2010 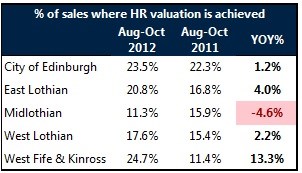 Most areas of East Central Scotland have seen a slight increase in the proportion of sales where the Home Report valuation was achieved, however the majority of properties are still being secured for less than their valuation figure. In Edinburgh, for example, the percentage of sales where the valuation was achieved inched up slightly from that recorded last year but remained low at 23.5%.

Properties towards the lower end of the market are significantly less likely to achieve their valuation than homes in the upper-mid market. In Edinburgh just 14.9% of properties valued at less than £100,000 achieved their valuation in the last three months. By contrast, 41.3% of properties in the Capital valued in the £300,000-399,999 bracket achieved a selling price equal to or greater than their valuation figure during the same period.

David Marshall, business analyst at ESPC said: "Since the onset of the credit crunch the lower end of the market has faced greater difficulties as the larger deposits required to secure mortgage funding have led to a significant downturn in demand from the first time buyers who previously would have been active in this area. Demand for family homes has been comparatively robust, but across the board the balance of power lies with buyers.

"Although there are fewer homes available for sale than at this time last year, the number of properties for sale is still above market norms for this time of year. At the same time the number of people who are in a position to buy is lower than you'd have seen prior to the 'credit crunch' so that obviously puts buyers in a strong position when it comes to negotiating on price."